Another month has passed without a rehearsal due to COVID-19 but we have still been busy upgrading our bandroom ready for our return.

During the week when lockdown was eased we took delivery of 30 brand new chairs. These have been funded by a grant received from The Rv E & H Moon Charitable Trust. The Moon’s Trust was set up to help organisations in the Pilling and surrounding areas and we are very grateful for their support to purchase the chairs and also the new music stands we bought last year. The main room floor has received a new lick of paint and we have also replaced the carpet in the entrance and the flooring in both toilets.

Below are a few photographs of the bandroom all set up with the new chairs and stands ready for when we can return to rehearsals.

Also during May our Safeguarding Officer, Shelley and Chairperson, Duncan took part in a ‘BandSafe’ Webinar hosted by Brass Bands England. “‘BandSafe’ is an industry leading selection of tools, training and resources to help you manage your band in a way that safeguards all your members from harm and the band from possible reputational damage. A safer band will make a healthy atmosphere for all and should have the added benefit of increased membership, developing younger players and community linking”.

Finally, we also received an update from Kapitol Promotions regarding our qualification to represent the North West at The National Brass Band Championships of Great Britain. They told us they are monitoring the COVID-19 situation, government advice and information from the venue very closely and will be in contact with all qualified bands at the beginning of July to advise whether the 2020 National Finals can take place. So keep your eye on our website and Facebook page to find out if we will be travelling down to Cheltenham in September.

May 2020 - Promotion to the Second Section Confirmed

Following on from our news article in February where we told you about our result at the North West Regional Qualifiers we are now very pleased to confirm our promotion to the Second Section from January 2021.

Promotions and relegations are based on a league table (below) made up from the last 3 results at the North West Regional Qualifiers. Over the last 3 years the band has placed 15th, 5th and 3rd giving us a points total of 23. This placed us joint second in the table with the City of Chester Band but due to our most recent placing being above theirs we were awarded the second promotion place behind Hazel Grove Band.

Speaking of the promotion our MD, Steve Hartley said “The promotion to the second section is a result of much hard work and commitment from the players of Pilling Jubilee Silver Band. Contest results and concerts have been of a consistently high standard and the players have responded well to the challenges set. We now find ourselves in the second section playing at the highest contest standard in the history of the band as well as qualifying for this year’s National Finals. My thanks go out to all who have contributed to the success and to say that I am pleased is an understatement. The last two and a half years have been just a bit special and I am looking forward immensely to conducting the band as we embark on the new challenges ahead.” 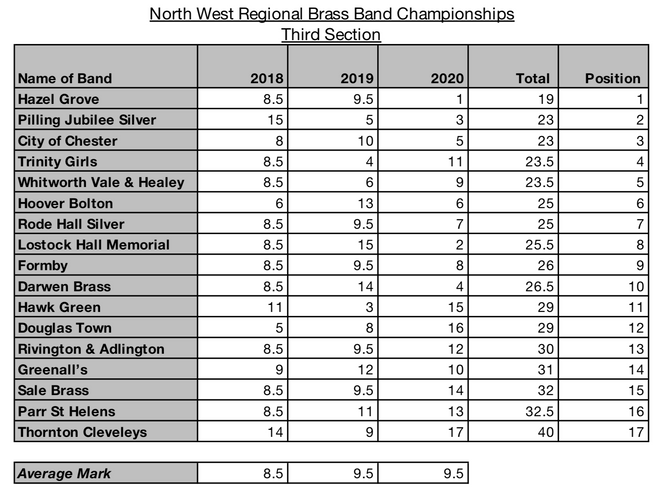 It's now been 7 weeks since our last band rehearsal due to the Coronavirus Lockdown but April has still seen some significant dates in the band members' diaries.

Friday 17th April saw our 2nd Baritone 'helper' Richard Horsley welcome baby Grandson, Quinn Arthur Horsley-Barker into the world. Congratulations from everybody at Pilling Band! Richard hails from North Yorkshire where he is a member of the Leyburn Band. He is currently working in Preston so comes to our rehearsals, concerts and contests while in the area and has become a vital member.

On Monday 21st April the list of set pieces for the National Finals was released by the organisers. These are:

This means that we will be playing Kaleidoscope by Philip Sparke at Cheltenham in September (all being well!!!). The music was quickly delivered and has now been sent out to all of the players for them to look at when practising at home. Our MD, Steve has been busy looking through the score and has already prepared some rehearsal notes which have been sent out to the players.

Thursday 24th April saw us host our first 'Zoom' meeting. Quite a few members of the band logged on and enjoyed a quiz which was put together by our Eb Bass player, Morgan.  I think Morgan overestimated our intelligence but well done to Lily who was our winner on the night and Thank You, Morgan!

Just before the 'Zoom' meeting 4 of our players, along with 2 from Poulton Band performed an arrangement for 6 cornets of 'Somewhere Over The Rainbow' in the weekly 'Clap For Carers'. Andy, Helen, Ben and Emily along with Neil and Laura played outside Ben and Emily's house (Social Distancing of course!).

Andy, Helen, Ben and Emily aren't the only members who have been playing on a Thursday night at 8pm. Gill our Repiano Cornet player, and her son Daniel have been entertaining the residents on their street for a number of weeks. Below are some pictures of them playing.

Also, Lily our back row cornet player has put together a video of her playing a number of instruments on a recording of Billy Joel's The Longest Time.

Andy and Helen also played on the 30th April for residents of Hackensall Road in Knott End. They played a cornet duet of Somewhere Over The Rainbow and were also joined by their children Ben and Alice to play Happy Birthday for Michael Bone and also Capt. Tom Moore. There are videos of these performances on our Facebook page which you can find by clicking the icon in the top left hand corner of this page.

We hope to share a few more videos of members playing over the coming weeks. 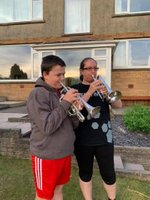 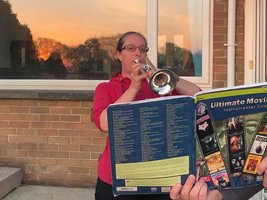 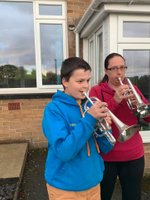 When March arrived we had a concert planned  at Garstang Golf Club on Friday 20th March. Unfortunately, due to the worldwide Coronavirus (COVID-19) outbreak this was cancelled by the organisers. The band also took the decision to postpone our concert in memory of Mike Hallett which was due to take place on Saturday 4th April.

On Monday 16th March it was announced by the Prime Minister that all non-essential travel and social gatherings were to stop to help prevent the spread of the coronavirus and we therefore took the decision to cancel all rehearsals until further notice. This has unfortunately meant most of our summer galas have also been cancelled but please keep your eye on our 'Engagements' page to see where you can see us performing next.

Sunday 23rd February was the North West Regional Qualifiers for the National Brass Band Championships of Great Britain known withing banding as the 'Areas'. We would once again be competing in the 3rd Section alongside 16 other bands. This meant that becuase there was 17 bands playing the top 3 would receive an invitation to the National Finals held in Cheltenham in September.

Unusually for us it would be late afternoon when we would be on stage so the players enjoyed the morning at home with their families before making their way to The Wainwright Club in Blackpool for a traditional pre-contest rehearsal. Once we had finished the rehearsal we all made our way to the Winter Gardens to find out our drawn number and therefore order of play. After a short wait in the cafe we had drawn number 12 and  would be playing in a couple of hours.

We played the piece Endurance by Andrew Baker in the Empress Ballroom to quite a few audience members. Another couple of hours wait then came until the results ceremony so a number of the band made their way into the bar at the complex.

The results ceremony got underway and as is tradition the individual awards are given out first with Hazel Grove band winning the 'Best Percussion' award. Then the bands placed in the top 6 are read out on stage in reverse order.

The results came out for 6th, 5th and 4th and then the announcer said "3rd and qualify... The band that played number 12, Pilling!" A loud cheer went up from the members in the hall waiting the results and our Contest Secretary, Andy Hall went on stage to collect the trophy! We had qualified for the National Finals for only the second time in our history!

Thanks to the good result Steve Hartley, our MD, gave us the night off from rehearsal the following Tuesday so instead we met up in the Elletson Arms, Pilling for celebratory drink.

Below are some photographs from the day at the Winter Gardens and the Tuesday night in the Elletson Arms.

Sunday 26th January saw the band competing in the first 'Brass In The Wire' contest. This contest has replaced the 'Brass At The Guild' event that used to take place at Preston's Guild Hall before its closure last year. Our coach picked us up early on the Sunday morning and we headed down to Parr Hall in Warrington. This Contest followed the same format as the 'Brass At The Guild' event where bands coud choose to play one of two test pieces. These were Gothic Dances by Alan Fernie or Endurance by Andrew Baker. We chose to play Endurance as this was the set piece for the Regional Qualifiers for the National Brass Band Championships of Great Britain. to be held in February.

We were drawn to play number 1 out of 4 in the Third Section and took to the stage early afternoon. As there was only 4 bands competing there wasn't a long wait for the results.

The results were announced on stage and the first ones awarded were the individual awards. We are really pleased to say our Solo Horn player, Kate Marney was awarded the prize for 'Best Horn' for the second year in a row! Well done Kate! The  band placings were announced next and we are happy to say we were awarded 2nd place by the adjudicator.

Contest Secretary, Andy Hall with our trophy for 2nd Place